Ray Charles’ first band, The McSon Trio, was the first musical act in Seattle’s history to have a sponsored television show as they did on KRSC-TV in Seattle.

Between the years 1949 (when Ray Charles first began his recording career) and 1963, he recorded 15 LPs and literally countless singles, spanning musical genres and charting new stylistic territories; his singles topped the charts in both the U.S. and abroad, selling millions of copies and laying the foundation for his legendary career, establishing him as one of the fathers of modern popular music. 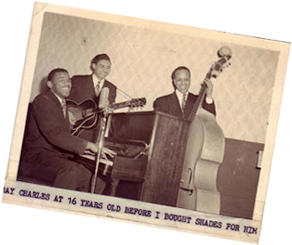