Ray Charles’ “I’ve Got a Woman” became his first hit to crossover nationally. 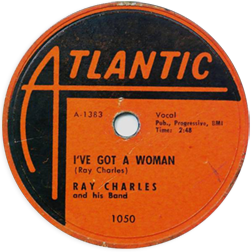 Ray Charles was the first major recording artist to negotiate ownership of his recordings with a record label as he did with ABC-Paramount Records.

Ray Charles was the first recording artist to release a Billboard Top 10 Pop Chart Hit that used the Wurlitzer Electric Piano as he did with “What’d I Say.” Many believe that this recording saved that instrument from extinction as Ray made it “cool” for other artists and bands to use it.

Ray Charles recorded his first Country and Western recording “I’m Movin’ On,” it reached Top 40 status peaking at #40 on the Pop chart.