Ray Charles received an Honorary Doctorate of Fine Arts from the University of South Florida in Tampa. At his own instigation, he returned to USF in February 1991, for a benefit performance at the Sun Dome with the USF Community Gospel Choir, marking the first time he has ever performed an entire program solely with amateur musicians. Proceeds from the concert were divided between the college of Fine Arts Music Scholarships Fund and Charles’ own Robinson Foundation.

Ray Charles’ GRAMMY Hall of Fame “I’ve Got A Woman,” recorded in 1954, as well as his 45th Anniversary of being in show business. Since his major recording hit, “I Got A Woman” it is generally conceded in the music world that Ray Charles has left an indelible mark on virtually every facet of popular music, be it R&B, Country & Western, Rock & Roll, Jazz, Gospel or Soul.

As Jeff Levinson wrote in Downbeat (Jan. 1989): “A few years back it was jokingly suggested that we just honor Charles by carving his visage at the peak of Mt. Rushmore…Wouldn’t that be a kick? Brother Ray rubbing shoulders with those shades, canvassing the Great Plains.” After a minute the idea was scrapped, rendered totally dumb… Why should we go through all that? The man’s already a monument! He is equally at home with the major symphony orchestras of the world (from London’s Royal Philharmonic to the Boston Pops) as he is with his own family of musicians — the 17 piece Ray Charles Orchestra and his five backup singers, The Raelettes. He never follows trends; he sets them.”

Ray Charles appeared on Listen Up: The Lives of Quincy Jones documentary as himself.

Ray Charles received the GRAMMY Award for “I’ll Be Good To You” performed with Chaka Kahn on the Back on the Block album on Quincy Jones’ Warner Bros. label.

Advertising Age named Ray Charles as its Star Presenter. He was recognized with a 1990 Clio Award as “Best Male Performer.” Time Magazine named Ray Charles’ “You Got the Right One Baby, Uh-Huh!” commercials the 1991 Campaign of the Year.

Following Jim Henson’s death, Ray Charles appeared in the one-hour CBS tribute, The Muppets Celebrate Jim Henson. He gave a speech about the deceased, stating that Henson “took a simple song and a piece of felt and turned it into a moment of great power.” Charles was referring to the song “It’s Not Easy Being Green,” which Charles later performed with the rest of the Muppet cast in a tribute to Henson’s legacy.

An excellent documentary, Ray Charles: The Genius of Soul, was produced for the American Masters series on public television. 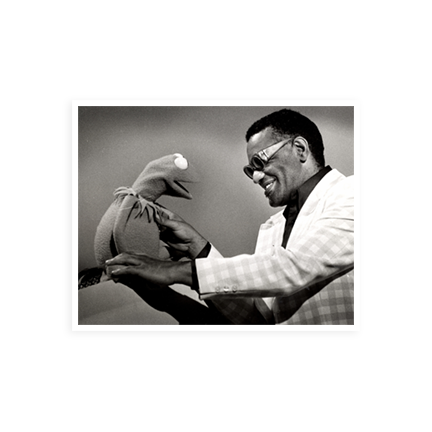 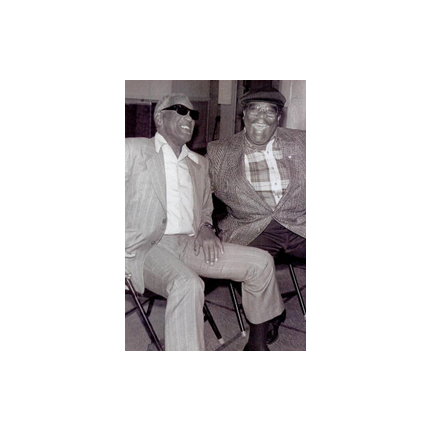 Ray Charles has received numerous awards from African-American Studies groups at campuses across the U.S., including the University of California at Los Angeles.

Ray Charles’ series of commercials for Diet Pepsi, which debuted in 1990, continue to bring praise for both Ray Charles as a pitchman and for the creativity of the campaign. The first in a series of Diet Pepsi commercials was acclaimed “The best commercial in the world.” Ray Charles was the first recording artist to be used in advertisements by both Coca-Cola and Pepsi-Cola as he did in 1966 and 1990. Joan Crawford accomplished this as a motion picture star.

50 Years of Music Making: A Tribute to Ray Charles featuring Michael Bolton, Willie Nelson, and Stevie Wonder among others, with MC Hammer as Master of Ceremonies, was taped by Willenborg Productions. Gregory Willenborg acted as co executive producer for the Fox Television Network special.

A survey by Video Storyboards, a leading tracker of America’s favorite commercial, showed that Ray Charles’ Diet Pepsi commercials were the most popular of 1991. After the Super Bowl, a USA Today poll showed the Charles commercials to be viewers’ first, second and fourth favorite commercials aired during the game. The Economist adds that “Diet Pepsi’s jazzy ads featuring Ray Charles have scored higher than those for any other consumer product.” PepsiCo approached Charles initially after its research showed “his appeal crosses age boundaries like few other performers.”

Ray Charles remains the first and only commercial spokesperson to have an ad campaign featured in two consecutive Super Bowls as he did with Diet Pepsi’s “You’ve Got The Right One, Baby …Uh-Huh!” campaign in 1991 and 1992. 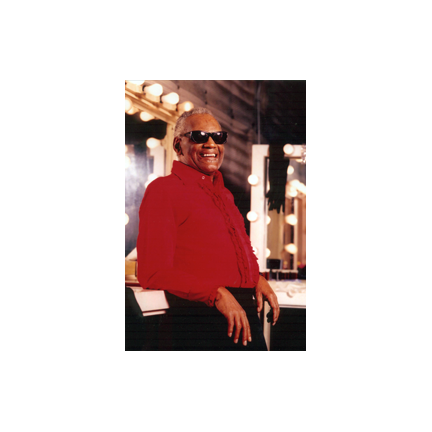 Ray Charles was honored by the Los Angeles County Board of Supervisors as the 1992 Black History Month Honoree, and was presented with the County’s Distinguished Service Medal in recognition of his outstanding contributions.

Ray Charles was inducted into the Florida Artists Hall of Fame (joining Hemingway, Tennessee Williams, and John D. MacDonald, among others). Charles, born in Georgia, was raised in Florida where he attended The School for the Blind, Deaf and Dumb and began his career as a professional musician.

Ray Charles received a GRAMMY for Best R&B Vocal Performance, Male for “A Song For You” Single.

Ray Charles joined other invited celebrity performers in the pre-inaugural concert at the Lincoln Memorial honoring President Bill Clinton. Produced by Quincy Jones, the concert aired as an HBO special.

Marks the year that Ray Charles’ rendition of “Georgia on My Mind,” record in 1960, was inducted into the GRAMMY Hall Of Fame.

Ray Charles recorded exclusively for Warner Bros. Records. “My World” (#126735) was released in March of that year. Charles is one of few artists to release in three formats: Cassette, CD, and LP

On an MTV showing of A Town Hall Meeting, President Clinton was asked to name his favorite song, to which he replied, “Ray Charles’ version of “A Song for You” which won Charles his 8th GRAMMY.

Ray Charles received his 8th GRAMMY Award, this time in the Best R&B Vocal by a Male Performer Category, for his song “A Song For You,” from his Warner Brothers release, “My World.”

Ray Charles received the World Music Award in Monte Carlo for his lifelong contribution to the music industry.

Ray Charles received the Helen Keller Personal Achievement Award from the American Foundation for the Blind.

Ray Charles appeared in Love Affair movie as himself. 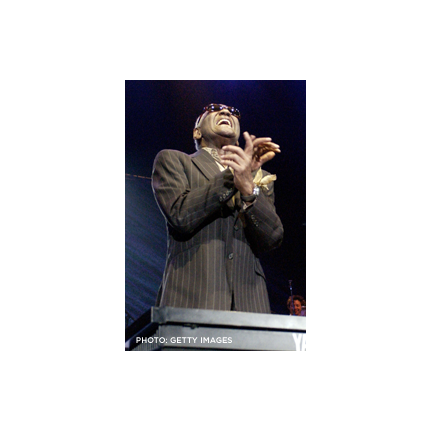 Ray Charles is given the Governor’s Performing Arts Award.

Ray Charles is honored with the Horatio Alger Award given to distinguished American citizens who have succeeded despite adversity. 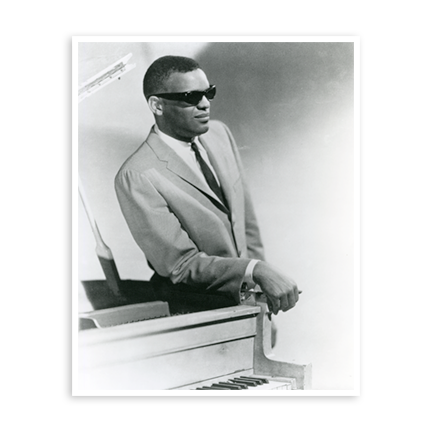 Ray Charles was honored with the award for Best Singer by Sherman R. Frederick, Publisher of the Las Vegas Revue Journal.

Ray Charles appeared in the movie Spy Hard as a bus driver.

Ray Charles was awarded an Honorary Doctorate of Music at Occidental College, in Los Angeles. 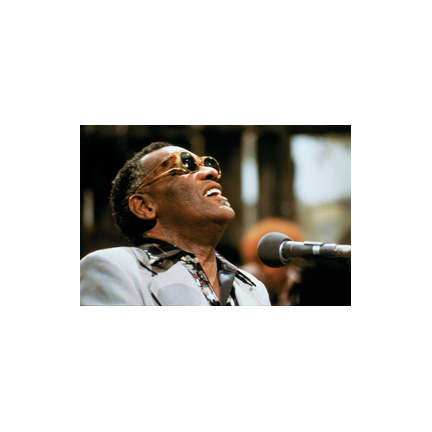 Ray Charles was honored by receiving the Polar Music Award, Sweden’s most prestigious award, presented by the King and Queen. 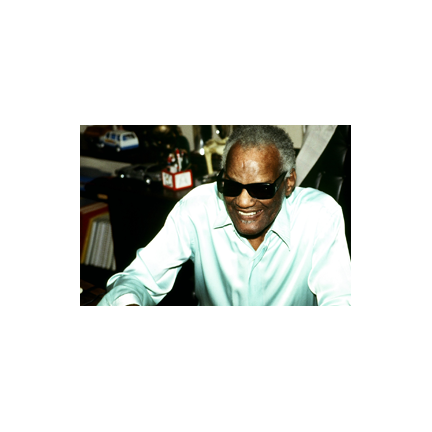 Ray Charles was awarded an Honorary Doctorate of Humane Letters from Wilberforce University.

Ray Charles appeared in 4 episodes of the sitcom The Nanny as Sammy.